This past weekend I got to experience the great joy and gift of attending CBE International’s annual conference, this year in Orlando, FL. I was chosen as one of three winners of their student paper contest and I got to read my paper at the conference (which, I learned, will be published probably early next year!!!). It was an amazing and delightful experience – and very, very intense. I met so many incredible and active people (including college friends and facebook friends!) and I learned so much in such a short time, it felt a little overwhelming. So I thought that I would write a bit – just a teensy tidbit – about what I learned from each speaker I heard.

Mimi Haddad and her assistant (whose name, I’m sorry to say, I did not catch), reminded me of the huge number of women in the Bible who were teachers, prophets, missionaries and preachers, builders of cities and leaders of countries. I learned that no one had a problem with Christian women leading in the church while it was dangerous to be a Christian and when women were being martyred in equal numbers with men. It was only after it became “safe” to be a Christian that our church fathers started squeezing out our church mothers.

Gricel Medina told me that we are drawn to life by an echo of Eden – that we should be further alone than we are in gender equality and we need to put on our running shoes! We must not merely LAMENT the sin of patriarchy – we must ACT to stop it!

Abby Dolan, the first student reader, told me that our ability to understand God shrinks with our language, and Haley Gabrielle, the second student reader, told me that the order of the presentation of headship in 1 Corinthians 11:12 makes an interpretation of that verse to determine hierarchy logically inconsistent. In writing my own paper, I learned that Paul abolished hierarchy in the church 2000 years ago and replaced it with sharing together in the faith of Jesus Christ.

Rebecca Kotz pointed out that what people think of as masculine is simply dominance, and what people think of as feminine is subordination, so we are socializing our boys to be dominant and our girls to be subordinate and then acting surprised when men express violence against women. She suggested that the answer is not to affirm or expand our definitions of gender (which is separate from biological sex) but to abolish it altogether!

Taffi Dollar brought to my attention that Genesis 1:26 gives dominion to people over CREATION, not over EACH OTHER.

Joy Moore told me that God keeps editing His story to write us back in after we walk out, thinking we can write a better one. She told that that “our task is to counteract the amnesia that undermines contemporary Christian expression.” She said that when all we hear are soundbites, we forget the story, which is that we need each other, and we can trust each other, because we are all image bearers of the Good God.

Again Joy Moore told me about stories – and that I must critique the stories that Hollywood tells – by the intention of the Creator. Stories, she said, force us to confront the destruction of God’s intention. Hollywood perpetuates those stories of destruction – our job is to tell a different story.

Aloo Mojola told me that in his 30 years translating Bibles in Kenya, he concluded that defining God as masculine is idolatry. He told me stories of when American funders forced translators to change God’s name to a masculine one, even though that would, in those cultures, make him a foreign God – or even identify him with a destructive god. He said that although we can’t avoid participating in patriarchy, because it is everywhere, we can decide HOW to participate. He said that the Bible has been used to defend immorality, and that Bible translation is too important to be left to (invisible) translators alone.

Ben Witherton III informed me that the Hebrew word for “know” in the beginning chapters of Genesis means to EXPERIENCE, as in experience of good and evil, which is presuming to be the master of one’s own fate. He told me that God’s commands are meant to LIMIT human violence, not condone it (ONLY an eye for an eye).

Jamin Hübner told me that one of the main ways sexism against women is DONE is by inconsistent hermeneutics or interpretations of the Bible. He said that complementarian interpretations often rely on calling incredibly unclear Bible verses extraordinarily clear, and he said that theology works in STORY, not proof-texting. And, he asked, why would Paul permanently prohibit one half of the globe from preaching the very gospel that Paul gave his life to spread as far as possible?

Dawn Salmons said that we can only think of equality in terms of servanthood.

Some (most) of what I learned from each speaker wasn’t even the main point of their talks. Just the bit that spoke most loudly to me. But I’m happy to say that we can listen to these amazing talks (and the MANY that I didn’t get to attend) when they are published on the CBE website. 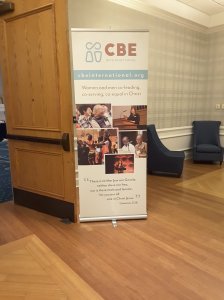 I am a Quaker wife, mother, pastor, and writer. I work as the country branch director of a fabulous NGO in Belize City and I recently graduated with an MDiv from Earlham School of Religion. I love my family, and I love my community. View more posts